The application of latitudes and longitudes to verbal locality data is called georeferencing. Latitude describes a position in degrees north or south of the equator. Longitude describes a position in degrees east or west of the Greenwich meridian. However, coordinates alone are of limited use without information on uncertainty and the coordinate frame of reference (datum).

Protocols for georeferencing natural history collections are described in the MaNIS Georeferencing Guidelines. Tools that automate these protocols include the Georeferencing Calculator, BioGeomancer, and GeoLocate. GeoLocate is called as a web service by applications within Arctos.

Any locality has zero or one coordinate assertions. “Unaccepted coordinates” are handled by having multiple specimen events referencing multiple localities.

Data Entry has (for brevity) one place for coordinate information, and these data are stored as both verbatim (in the collecting event) and locality coordinates. Events and localities may be pre-made and selected when these limitations prevent accurately representing the data.

Geographic coordinates vary with the source of the data. Classically, latitude and longitude have been recorded in degrees, minute and seconds. Now, modern GIS applications generally use degrees only, including decimal fractions for all levels of precision. In Arctos, coordinates are stored and displayed in their original format. Except for UTMs, coordinates are also translated to, and stored as, decimal degrees for standardization and mapping. There is not yet programming to convert UTMs to decimal degrees. Forms in Arctos are customized according to which format is chosen. The vocabulary and formats for Original Units are defined by a code table.

In all formats, include as many digits of precision as are provided in the original data.

The geodetic datum to which the latitude and longitude refer, with values controlled by a code table. A geodetic datum describes the size, shape, origin, and orientation of a coordinate system for mapping the earth. Latitude and longitude data referenced to the wrong datum can result in positional errors of hundreds of meters. Therefore, when providing latitude and longitude data, it is important to know from which datum those data are derived. Most GPS units allow you to select the geodetic data from which its coordinates will be determined (default usually set to WGS84, but this should be checked in the field). Maps and gazetteers generally provide this information as well.

Reference Source(s) refers to the source of the coordinates and not to the source of the error. Coordinates may be original data collected with the specimen, or they may be provided by after-the-fact georeferencing efforts. In the latter situation, data in Source(s) should be specific enough to allow anyone in the future to use the same resources to validate the coordinates, or to georeference the same locality. These data might be a list of maps, gazetteers or other resources used to georeference the locality. Examples:

Georeference Method is the protocol used to obtain values for the coordinates and the measure of precision. Different methods and tools have been produced, and are sometimes revised, and these differences can produce different results. The vocabulary for this field is controlled.

This is the upper limit of the horizontal (as opposed to elevational) distance from the reported latitude and longitude. It describes a circle within which the whole of the described locality lies. Leave the value empty if the uncertainty is unknown, cannot be estimated, or is not applicable (because there are no coordinates). Values are controlled by a code table. Zero is not a valid value. Maximum Uncertainty is the sum of GPSAccuracy, Extent, and all other sources of error or imprecision.

This is a simple concept, but there are several sources of error which, when correctly combined, often demonstrate a value larger than intuition might suggest. These sources of error are enumerated in the MaNIS Guidelines, and are combined into estimates of total error by the Georeferencing Calculator.

In some circumstances the greatest source of error is the behavior of the collector and/or any intermediary sources of the data. For example, if a locality names a village, the collector may have obtained specimens from a resident who forages over a large area near the village. The collector may even have provided coordinates for the village, often from some standard source, implying specificity equal to the extent of the village. Estimating error can therefore be subjective, and conservative interpretation demands large values for Maximum Uncertainty. To avoid ambiguous or misleading locality descriptions, see MVZ’s guidelines.

For most usage, including exportation to federated portals, the value for Maximum Uncertainty is converted from the original units (recorded here) to the value in meters.

The Determiner is the agent (usually a person) who determined that these coordinates and measures of uncertainty apply to this locality. Often, this is the collector or, dear reader, you. The form will load with the currently logged-in user as the default Determiner for new records.

This is the ISO8601 date that the determination was made. Entry/editing forms load with the current date as a default for new records.

A categorical description of the extent to which the georeference has been verified to represent the location where the specimen or observation was collected. Vocabulary is controlled.

“Verified by collector” indicates that the person who removed the specimen from nature has looked at the coordinates and uncertainty represented on an appropriately scaled map, and believes that these data are accurate and that the represented uncertainty is as small as possible.

There can be more than one georeferencing determination per locality but only the accepted determination is routinely displayed. You can revert to an earlier determination by changing its accepted flag from “no” to “yes.”

Remarks are about the spatial description determination, explaining assumptions made in addition or opposition to the those formalized in the method referred to in Georeference Method.

For example, this query (note the “query by points only” option): 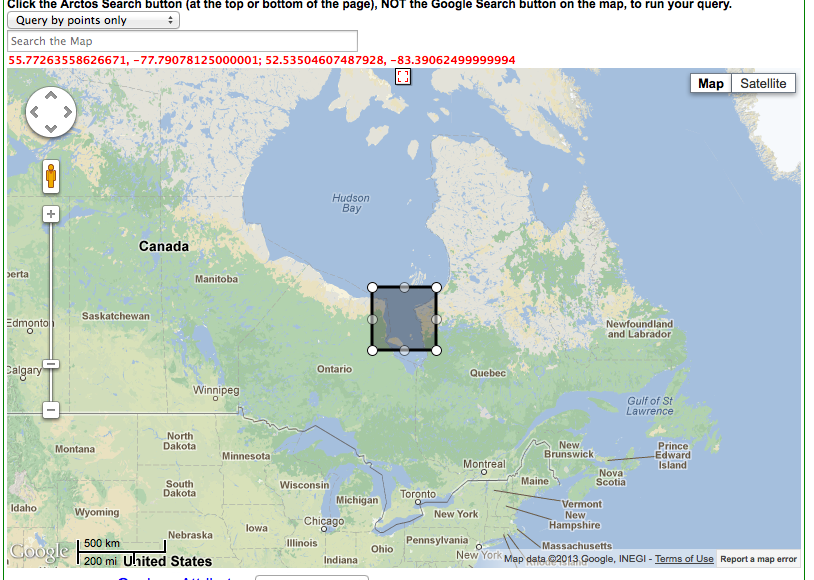 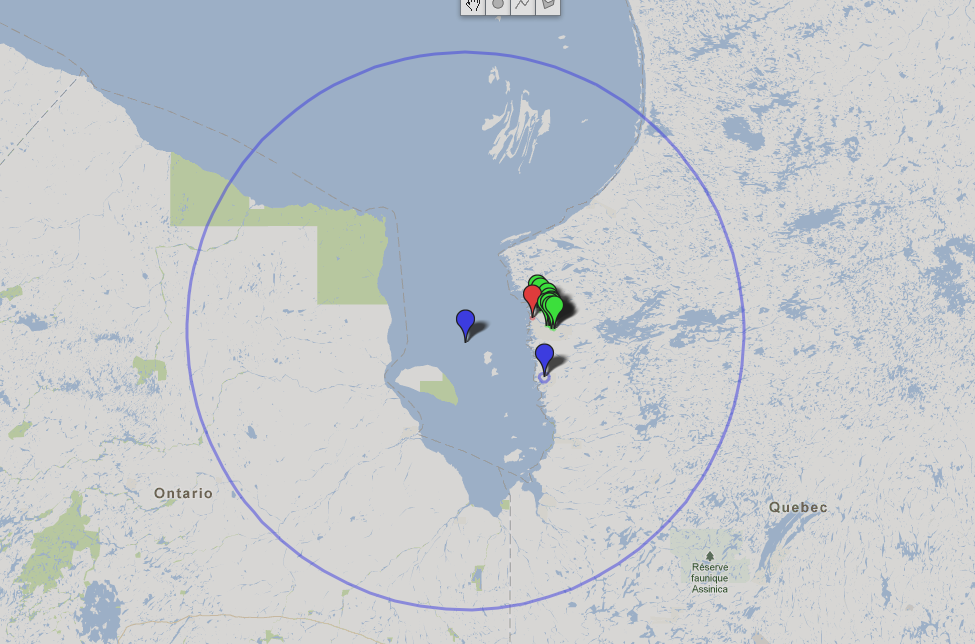 Note that BerkeleyMapper does not by default include precision or remember your settings, so you must enable it every time: 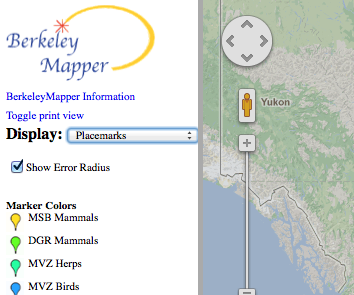 Feel free to stop by and leave a comment on this issue!

Change the original query to “points and error”…. 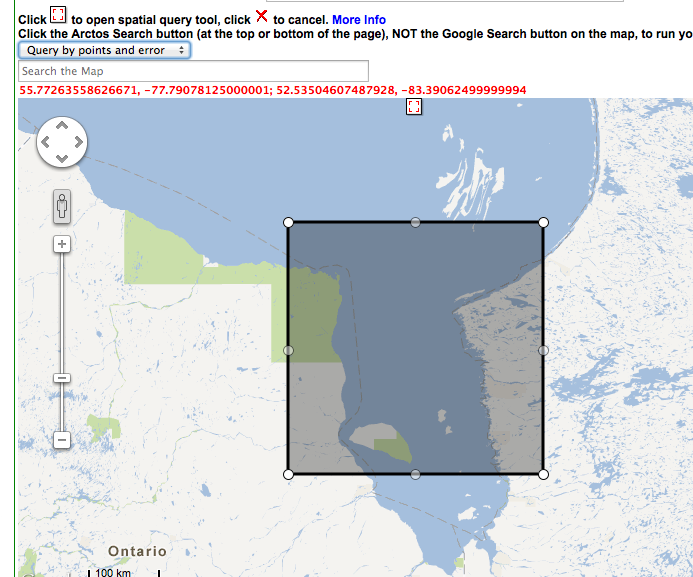 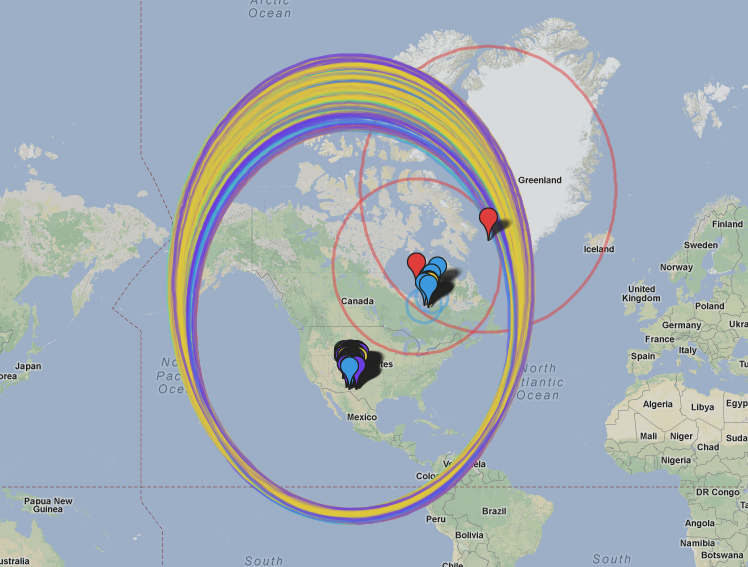 To remove the huge-error specimens, we can add a maximum coordinate precision value: 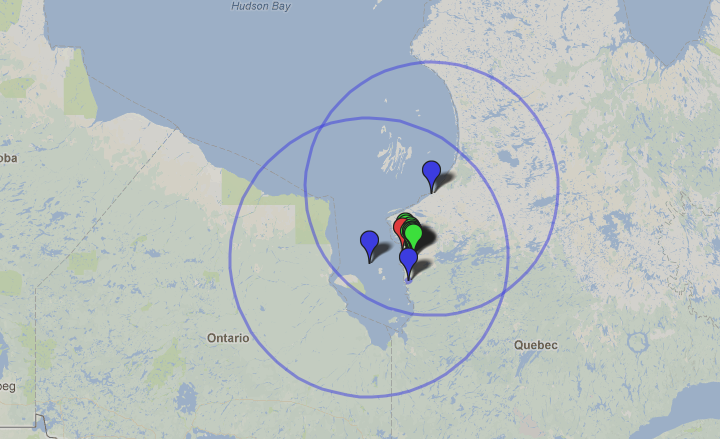