How To Manage Taxonomy Hierarchically

Hierarchical data are those in which each term is unique and each term has zero or one parent terms.

Taxonomy (as a body of literature) is not hierarchical. The “parent” of Echidna (a homonym) varies according to usage, and includes “Muraeninae” (eels) and “Viperidae” (snakes). The “parent” of “Neotoma” has changed with our understanding of evolutionary history, and has at times and according to various authors included “Cricetidae” and “Muridae.”

The core taxonomy structure of Arctos is built to hold all of the above data and anything else which might have been considered “taxonomy” at some point. Arctos taxonomy consists of grouped, sometimes named, sometimes ordered terms. There is no enforced consistency across or within taxon names; the structure which allows varying taxon concepts also allows inconsistent data (which are programmatically indistinguishable from taxon concept assertions).

Arctos provides a hierarchical taxonomy management tool suitable for consistently managing large groups of taxa as hierarchical data. Hierarchical data are those in which each term is unique and has zero or one parent terms. That is, the term “Neotoma” can exist precisely one time in a hierarchy. A term can have any number of children (“Neotoma albigua”, “Neotoma cinerea”, etc.), and those terms may have children of their own (“Neotoma albigula albiglua”). “Neotoma” must have zero or one parent terms - “Cricetidae” or “Muridae.” There is no possibility of Neotoma having two parent terms within the same hierarchy.

Data in Arctos are seldom consistent even at very small scales. For example, the Arctos classifications for Neotoma devia (http://arctos.database.museum/name/Neotoma%20devia): 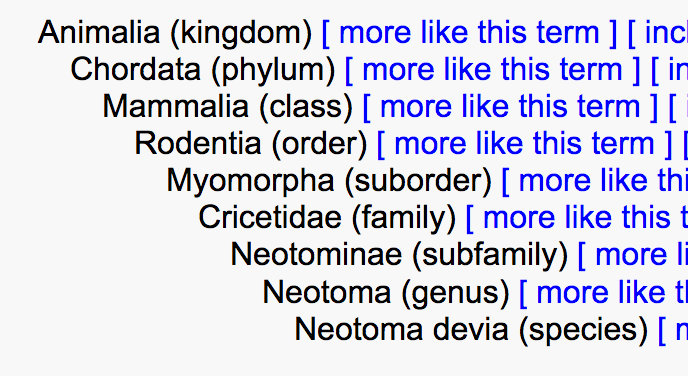 diverge at the level of subfamily.

This inconsistency is not possible in hierarchical data, so the import process will attempt reconciliation. This will very likely result in orphaned ranks.

In this example, the processor encountered subfamily “Neotominae” first and so “Sigmodontinae” has been ignored. It is necessary to reconcile these discrepancies before exporting the data back to Arctos.

Dealing with these inconsistencies is a very large proportion of the work involved, and the source of all data lost in the hierarchical editor. For collections which can manage specimen data under a hierarchical taxonomy, we highly recommend avoiding sources which are edited with tools that allow the existence of inconsistent data.

Changing the subfamily of Neotoma in the Arctos single-record editor is a hit-or-miss prospect. A user would have to find all records which are their idea of Neotoma (e.g., exlude those which are homonyms or hemihomonyms), update each individually, and hope that the process of editing 145 records has somehow not introduced other inconsistencies.

A request for DBA update would involve a non-taxonomist attempting to match strings in a system with tens of thousands of known homonyms. This has not worked well in the past.

The classification bulkloader can work, but runs the same risk of encountering [hemi]homonyms as the DBA update. Finding the records to update becomes increasingly difficult when the names do not share strings - finding Neotoma is straightforward, but finding all genera which should be under Neotominae is effectively impossible due to variations in the data.

Importing data to the classification bulkloader comes with all of the above difficulties in finding data, but unlike other tools the editor provides reports for missed or inconsistent data. Orphaned terms provide another strong indication of inconsistency. For example, finding “Arachnida” somewhere in the Neotoma data might indicate that a homonym has been used for identifications in unexpected ways. (The classification bulkloader would simply over-write the spider classifications, potentially altering specimens in unrelated collections.)

Importing clean data - that which has not been edited by non-hierarchical tools - to the hierarchical editor involves only providing a “seed” (eg, “Neotoma” or “Cricetidae”) and clicking a button.

Changing the family of Neotoma in the hierarchical editor involves only dragging the term “Neotoma” to a new parent.

A user attempting to find specimens amongst inconsistent data will almost certainly fail without knowing they’ve failed. For example, a search for “Neotominae” against the classification data above will find Neotoma devia but not Neotoma devia monstrabilis. Most users will not realize that they’re missing a subspecies, but instead will assume that what they’ve found is all that’s available from Arctos and move on.

Some operations are easier done in text files. To make a consistent change across a dataset, the following actions may be performed:

Open the hierarchical editor and create a source if you haven’t already.

Use Option Two with your Source

Data. Note the outliers - this should be expected, it’s just a reflection of the inconsistent data in the Arctos classification, drag stuff around to rearrange 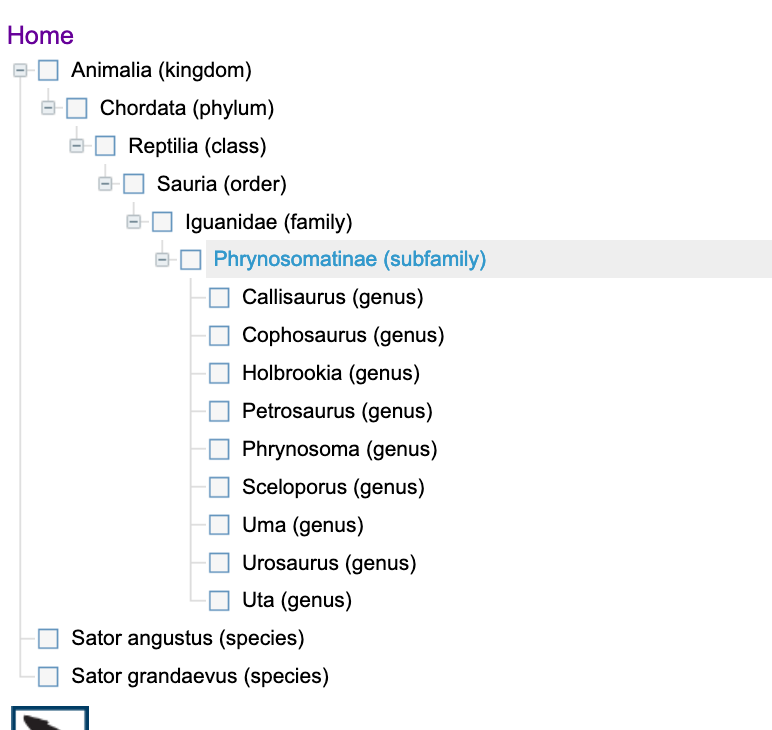 To save/repatriate back to “core Arctos”, first navigate back to hierarchical editor home screen, then select a target source and save.

Wait a while (on production, on test run ScheduledTasks/hier_to_bulk.cfm), when status has fully changed again…. 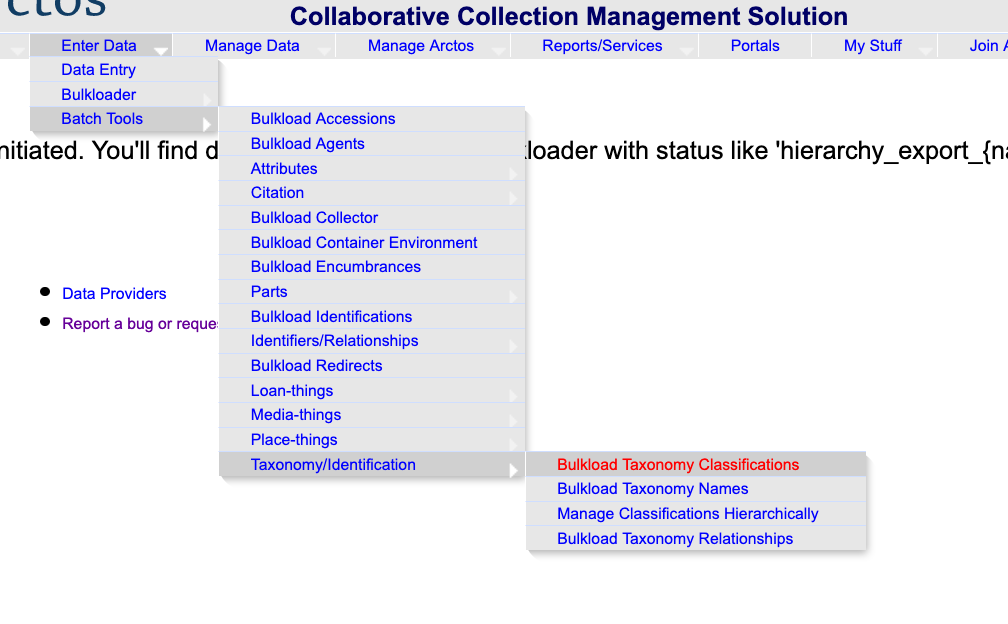 …and hang out a while (or on test, run component_loader). When the classification loader has been cleared, the data will be available in the normal place