How to Create an Accession

What is an Accession? Before you make any decisions about one, you should know what it is. Start by reading the Accession Documentation.

Accessioning is the formal act of legally accepting an object or objects to the category of material that a museum holds in the public trust, or in other words those in the museum’s permanent collection. Because it commits staff time, space and other resources to the proper care of this material, it is important that acquiring material for the collections be done in a thoughtful, inclusive way that reflects the best interests of the museum and its audiences, and can be sustained by the available resources.

Is an accession number required for all specimen records?

Yes, an accession number is required, but if you choose not to create individual accessions or do not have that info available, you can create a legacy accession (e.g. 0000.00.Herp). You can later move groups of specimens to other accessions as you find the documentation or discover reasons to create them.

You will be directed to a page where you can enter information required to create a new accession.

Some institutions use Accession Number in place of Catalog Number for a specific cataloged item. In Arctos, these numbers are not the same. There may be multiple cataloged items in a single accession.

Once you are satisfied with all the information you have entered about your new accession, click “Save this Accession” in the pink box at the bottom of the page.

After saving, the page will refresh and show you an updated layout for your accession documentation. At this time you can associate permits or projects with the accession or link barcoded containers to the accession.

Be sure to click “save changes” at the bottom of the page before leaving the page.

How to Create an Accession Tutorial Video 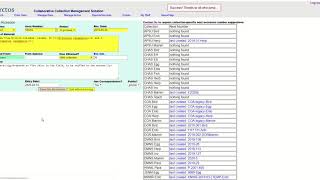