Higher Geography is a combination of terms delineating geopolitical units and it includes many imprecise regions. These terms are descriptively applied to Localities. In so far as counties occur within states, states within countries, and countries within continents, these data are approximately hierarchical, but only approximately. For example, a state park or national forest may be comprised of segments from two or more counties. Columns in the Higher Geography table are concatenated into the column higher geography which is uniquely indexed. The concatenated string “higher geography” is the only column displayed and used in data entry. Unfortunately, you cannot assume that any locality or area is listed under only one higher geography. The guidelines below are intended to prevent (and even remedy) such inconsistencies.

All records in Higher Geography have a value in this field. A record with the value “no higher geography recorded” is applied to specimens with no geographic data. Western Russia is in Europe, eastern Russia is in Asia. Both are sometimes in Eurasia.

is the familiar concept of first-level political entity, though various territorial claims complicate reality. We currently recognize Greenland as a country and not as a state in Denmark. (It would not occur to most users to search for muskox from Denmark.)

Note that country is political, not geographic, as demonstrated by georeferenced specimens “from France.” 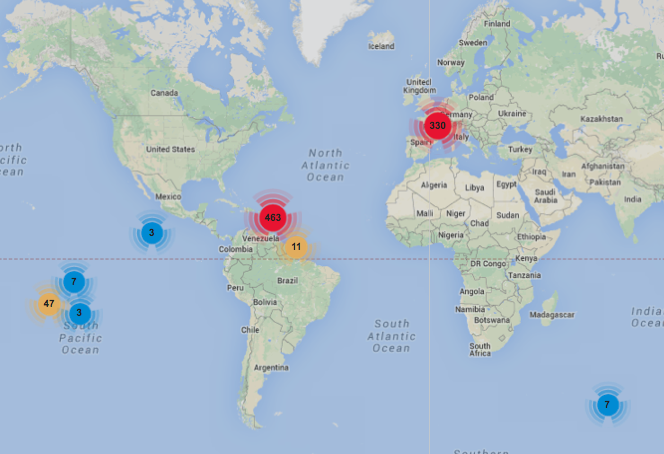 These are primary subdivisions of a country, be they states, provinces, departments, or okrugs.

are defined as divisions of oceans, but for a large proportion of open ocean, seas are not applicable. For example, the waters north of Point Barrow, Alaska are in the Arctic Ocean but are in neither the Chukchi nor Bering seas. Similarly, the coastal waters of California, and the east coast of Japan can be designated only as North Pacific Ocean. There have been efforts to formally delineate seas and oceans (e.g., the U. S. Navy’s “Chart of Seas and Oceans” and the U. S. Defense Intelligence Agency’s “Geopolitical Data Elements and Related Features,”).

These should be consulted for the name of seas, or if there is a question about whether a locality is appropriately included in a particular sea. (In their effort to be comprehensive and consistent within a domain where rigorous definitions are not commonly used, these references occasionally offend common sense.)

County is a second-level political subdivision of a country, regardless of local labels. For example, “Primorsky Krai” is a County in the Far Eastern Federal District (a State) of Russia. Note that administrative hierarchy rather than local terminology defines County: Montserrado County is a State in Liberia and does not belong in the County field.

The name of the U. S. Geological Survey topographic map quadrangle. The name of the quad should include the map scale. Ex. ‘Ambler River 1:250,000’. The 1:250,000 series has been used because Alaska lacks anything as inclusive counties; “quads” have been used extensively in organizing collections and interrogating data (Although note that a combination of Borough and Census Area is all-inclusive and mutually exclusive and therefore serves as a suitable if large-scale “county substitute.”). Finer scale quads are used by other collections as sub-county level geography.

Features include named entities such as parks, preserves, refuges, and other delineated geo-political features. Feature may also be used to describe recognized sub-groups of islands. Many administrative units included in Feature have ephemeral boundaries, if not an ephemeral existence. Their past and future use may be inconsistent. Therefore, avoid using Feature if the locality is well georeferenced and/or unequivocal in the absence of Feature.

is defined as the largest island group or Archipelago to which an island belongs. Island groups within island groups should be indicated in Geographic Feature.

When a locality includes an island name, and the locality is on or near an island, then the name of the island should be included in this field. An island is included in this field if a locality has the word “island” in its proper name even though (depending on the tides) it may be a peninsula. (Rhode Island is nevertheless a state.) An offshore locality that is associated with, and near, an island should include the island. For example, if the Verbatim Locality is “100 yds off of the beach, Bay Farm Island, Alameda Co., California”, then the Higher Geography record should include:

On the other hand, a locality description may include an island only as a point of reference, e.g.,“456 nautical miles SSE of Midway Island.” In this case, inclusion of data in the island field is inappropriate. The island name should be included in the island field even though it may be the same as the specific locality, e.g.,

Names should be spelled out, including the word “island” when it is part of the name. Some valid island names:

Source is limited to the URL of a page on Wikipedia. English is strongly preferred; Spanish is acceptable. (Contact us with other needs.) If such a page does not exist, it should usually be created. However, in some instances such a page would be overly redundant or conflict with Wikipedia guidelines, in which case the next-most-specific entry is appropriate. Examples follow.

Start Date and Stop Date must be given as an ordered pair or not at all. These are parenthetically included in the higher_geography concatenation.

Dates are often not known to even year precision. Elaborate on any assumptions or guesses in remarks. Delete any unused geography records with dates as you encounter them.

Dates signify less-than-ideal geography, often without spatial data. Do not use these data if it is possible to avoid them, and “upgrade” any catalog records to avoid these data as resources permit.

(as a specific data field) is a the actual concatenation of the subdivisions described above. This is the value that is displayed in most applications.

In addition to the “formal” fields, the Edit Geography form provides for any number of UTF-encoded additional identifiers. These should not be considered “formal”

terms, but as search aids. The “any geography” specimen search field will consider these data, and they will be displayed on Specimen Detail.

A remarks field is also provided. Information in this field is intended to provide guidance and clarification in future geography creation or merge events, and is not searchable nor intended for public display.

Scrupulous consistency is essential. With inconsistent data, users will not find what they’re looking for, and operators will not be able to use import tools. The primary function of these guidelines is to promote consistent, predictable data across Arctos; while proper data in a single record is important, more important is being consistent at scale (across states, islands or island groups, countries, and ultimately all of Arctos). These guidelines have been developed to facilitate consistency, and to allow tools which facilitate consistency to exist. Do not deviate from the Guidelines without contacting the AWG.

Guidelines for assigning geography to specimens.

A primary purpose of Higher Geography is to facilitate finding specimens, and so a primary curatorial goal should be to facilitate that usage. Arbitrarily or improperly linking geography to specimens WILL result in users not finding what they’re looking for. For example, if point X, Y is described by both Geography A and B, queries for either “A” or “B” will find some unknowable subset of the intended specimens, and provide no clue to the user that there are additional suitable specimens assigned to another geography entry, thereby failing to provide the user with an accurate answer and decreasing the overall value of the specimens and their associated data.

There are two special use cases where assigning a single administrative geography to a record is not possible. For example, legacy records may not have complete or have missing locality information, in which case the locality is simply “no specific locality”. For those records, “no higher geography recorded” is appropriate. The second example is for records which do have locality information but are not limited to a single site and single administrative geography. For example, an archival or cultural record may be an item with entries or components spanning several locations on more than one continent, in which case, using “no specific higher geography” is appropriate. (We do assume it’s from planet Earth.)

Higher Geography should be viewed as “semi-arbitrary curatorially-assigned string” rather than “singular definitive placename.” A specimen with a very precise and accurate georeference might be assigned to a state, state+USGS map quadrangle, state+county, state+feature (e.g., military reservation), or any combination of these and more. These assignments depend on collection-specific curatorial practices, the information available when a specimen was cataloged, and various other factors. Especially for cross-collection queries, it is often advisable to search “Any Geographic Element” (which considers webservice-derived data) or to search using the “Select on Google Map” option. Both of these methods work best with georeferenced specimens; additional or exploratory queries may be necessary to find all relevant specimens. Use the contact link at the bottom of any Arctos page for assistance.

Coastal localities should be described with terrestrial descriptors. For offshore localities, the Higher Geography should include at least the ocean in Continent/Ocean and, if applicable, it should also include Sea. (Therefore, “coastal” specimens are often impossible to location by descriptive geography queries.)